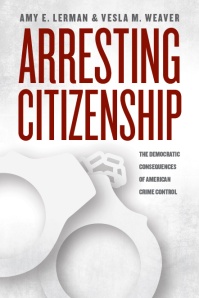 Never before has American government exhibited so strong an urge to punish, and so vast a network of institutions dedicated to the control, confinement and supervision of its citizens. Citizen contact with criminal justice is unmatched in American history and around the world.  How does our view of American democracy change once we account for the growth of its punitive apparatus? How do citizens experience government and democratic citizenship when the most visible face of the state is punitive?

In this book, we argue that the modern criminal justice system embodies a set of values that are antithetical to democratic norms.

Through the detailed narratives of over one hundred custodial citizens, along with careful analyses of large-scale survey data, we demonstrate that contact with police, courts, prisons and jails produces a “carceral lifeworld”—a particular sense of the state, conception of citizenship, and orientation toward the democratic polity. The result of criminal justice contact is decreased trust in political institutions and a reduced faith that the state will respond to the will of the people. Worse, custodial citizens not only disengage and feel disempowered, they actively fear and avoid interactions with government.

At the same time, contact with criminal justice shapes citizens’ racial transcripts, constructing ideas not only about blacks in custody, but about the condition of blacks in America—perceptions of their worth, standing, and citizenship. Blacks who undergo law enforcement interventions are more pessimistic about racial equality in America.

Our focus is not simply criminal justice as a distinct policy domain, separable from American governance more broadly. Our inquiry must instead also prompt us to revisit core assumptions about the character of the American state and the increasingly defining role of its least democratic institutions. Our central claim is that the growth of criminal justice has fundamentally recast the citizen-state relationship.

Read a key findings brief about Arresting Citizenship on the Scholars Strategy Network.  Review from Prison Policy Institute. Review in American Journal of Sociology. Review in the American Prospect.

Frontlash: Civil Rights, the Carceral State, and the Transformation of American Politics

In analyzing how the United States came to operate the most expansive criminal justice enterprise in the world, I argue in Frontlash that the carceral state’s robust and sudden development owes its beginnings to the conflict over race.  Rather than a genuine response to crime, the origins of the punitive turn in crime policy can be traced back to a campaign by defeated policymakers, who turned the crime issue into political currency to make an end-run around civil rights.  The graveyard of civil rights legislation was the same place where crime bills were born.  First, through a process I term frontlash, elites mobilized around crime and violence after suffering serious defeats in civil rights, arguing that crime legislation would be a panacea to protest and “crime in the streets” and building an indelible connection between black activism and crime.  Second, this episode resulted in a set of policy changes that speeded the development of the carceral state.  Specifically, passage of the omnibus Safe Streets and Crime Control Act built up tremendous state capacity to punish, engendered a whole network of new institutions dedicated to crime-control and punishment, and fostered powerful interests with a stake in the new punishment bureaucracy.  The policy shift expanded police departments, spent billions on new prisons, agencies and technological developments, promoted a burst of state policy change and criminal code reform, and stimulated the formation of a powerful criminal justice lobby.  I show that not only did this reform episode double the prison population in the first few years, it made a deep imprint on the later functioning, limits, and possibilities of the carceral state. 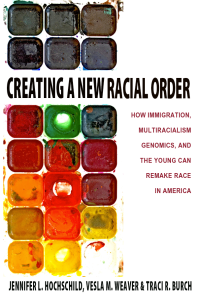 Creating a New Racial Order
How Immigration, Multiracialism, Genomics, and the Young Can Remake Race in America
Princeton University Press 2012

The American racial order—the beliefs and practices that organize relationships among the nation’s many races and ethnicities—is undergoing its greatest transformation since the 1960s. Creating a New Racial Order takes a groundbreaking look at the reasons behind this dramatic change, from the late twentieth century to today, and considers what parts of the American population have been affected. Through original analysis, revealing narrative, and striking research, the authors show that the personal and political choices of Americans will be critical to how the racial hierarchy is redefined in decades to come.

The authors examine the components that make up a racial order and focus on the specific mechanisms influencing shifting demographics in the United States: immigration, multiracialism, genomic science, and generational change. Cumulatively, these mechanisms increase heterogeneity within each racial or ethnic group, and decrease the distance separating groups from each other. The authors show that individuals are moving across group boundaries and that genomic science is challenging the whole concept of race. Economic variation within groups is increasing and the traditional hierarchy of whites on the top and blacks at the bottom is breaking down. Above all, young adults understand and practice race differently from their elders: their formative memories are 9/11, Hurricane Katrina, and Obama’s election—not civil rights marches, riots, or the early stages of immigration.

Portraying a vision, not of a postracial America, but of a different racial America, Creating a New Racial Order examines how the structures of race and ethnicity are altering a nation.

Read the Introduction to CNRO.

Read a review of CNRO by Rogers Smith and a review by Jennifer Lee.