The State From Below 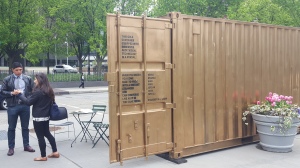 In 2015, Americans learned that public authorities in Ferguson, Missouri had imposed a “predatory system of government” on poor black citizens. Ferguson residents were targeted, arrested, and summonsed on civil-ordinance violations, assessed prohibitive fines and fees, and subjected to jail if they failed to pay. The extensiveness of the repression, harassment, and pilfering of the citizenry looked eerily similar to the practices of failed states and authoritarian regimes and yet, Americans struggled with how to understand what looked like vastly different governing arrangements in a single republic.  Is there a distinct type of governance being practiced in communities within our democracy?

With support from the Andrew Carnegie Fellowship, we used a new technology and civic infrastructure, Portals, to initiate conversations about policing and incarceration in communities felled by police violence – communities like Freddie Gray’s, Michael Brown’s, and Eric Garner’s.  By creating a “wormhole” through space, a bridge to places unseen and unheard, and, crucially, by making access to these wormholes easy and free, Portals transforms the capacity of disparate people and communities to define their narratives, enhance political activism, create connected political spaces, and expand the possibility of studying politics in beneficially recursive ways.  See more at the Portals Policing Project.

What are those shiny gold shipping containers? This article in the Atlantic’s CityLab gives the gist of the Portals project. This one describes the project after we previewed findings at Notre Dame’s Rooney Center for the Study of American Democracy .

Working papers and articles related to the project: